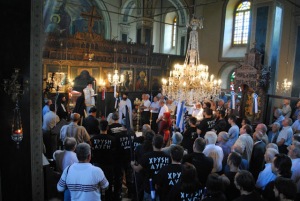 Since the national elections of 2012, when neo-nazi party Golden Dawn entered the parliament with nearly 7 percent of the popular vote and 18 seats, there have been numerous occasions of supportive announcements and sympathy sentiments from metropolitan bishops of the Church of Greece.

Somehow, it all started on October 2012 when controversial theatrical play “Corpus Christi” sparked anger among some orthodox religious groups and Golden Dawn. They threatened hand in hand the director and actors of the play and finally attacked journalists and theatre-goers.

At the time, Bishop Seraphim of Piraeus together with several members of the neo-nazi party filed a lawsuit for “malicious blasphemy” and “insulting religion”.

However, the Standing Holy Synod -the highest governing body of the Church of Greece- has distanced itself from the lawsuit stating that there was never a “mandate” to follow such procedure. In a previous statement though, the Synod had condemned the play as “blasphemous” while stating: “we urge our People to condemn this”.

Until today there has never been an official statement (from the Standing Holy Synod) that condemns the deeds of Golden Dawn.

On October 14th 2012, after the “Corpus Christi” incident, Bishop Pavlos of Siatista opened fire to Golden Dawn and heavily criticized some “Christian militants” for identifying themselves with the neo-nazis. Later on, he said he was receiving threatening calls and messages from members of Golden Dawn.

Sources with very good knowledge of the way Greek Church functions, told us:

“Ecclesiastical hierarchy is an unwieldy body taking decisions as a whole. In this manner, it would be unfair to hold the whole of the Church responsible for building ties with Golden Dawn. There are of course some bishops who openly express their views. As all people, they will be judged”.

For instance, Bishop Amvrosios of Kalavryta often using an anti-communist and anti-semitic rhetoric, has openly expressed his support for Golden Dawn:

“If you change your style, i.e. if you become mature, you will be able to become a sweet hope for the desperate citizens and a quiet force in the rotten political system”.

We contacted theologian Vassilis Xydias on September 13th to ask about his personal view on the relationship between Golden Dawn and the clergy.

“What lies at the ‘Achilles’ heel’ of the Greek Orthodox Church is a mentality of ‘the enemy that undermines the nation’. There is a common ideological and, essentially, psychological basis whereby ‘everyone conspires against you’, say the Jews, the Masons etc. There has always been ‘a need’ for a secret enemy against which you don’t stand good changes to win. This is exactly the space Golden Dawn is using, for propagating its ideas and influence. It is a conscious and strategic move so as to capitalize from Greek Orthodox Christians”.

Writer and researcher Stavros Zoumboulakis has recently published the book “Golden Dawn and Church”. Zoumboulakis, according to critics, anticipates from the official Church to take a firm stance towards neo-nazis and far-right extremists.

He argues about the anti-communist rhetoric adopted by the majority of the clergy since the Greek Civil War, during the 7-year military junta anduntil today. “The Greek Orthodox Church in the postwar era becomes a stylobate of an authoritarian and police state”, says Zoumboylakis on an interview in “ΒΗmagazino” magazine.

Apart from the ‘political’ nature of the matter, from a theological perpective, there is evidence that Golden Dawn and Christianity bear a rather odd relationship. An investigative- reporting blog called “Jungle-Report” has shown that the nazi party falls into contradictions when it comes to Christianity.

In Golden Dawn texts, it is evident that Lucipher (Satan) is being worshiped while paganism is embraced. Vassilis Xydias commented on that:

“Golden Dawn’s ideological starting points are paganistic, anti-christian and anti-semitic. In reality, Golden Dawn sees in Christianity a hidden transformation of ancient Greek religion with Dodekatheon (Twelve Olympian gods). So, while not wanting to provoke divisions inside ‘the nation’, it turns a blind eye on what or whom to worship. It is a documented pro-Christianic tendency in the Neopaganism stream”.

But what is really happening among people who regularly go to the church? A lot of believers, when asked about the role of Golden Dawn, refuse to open a discussion. Those who choose to answer though, firmly support the view that “Christianity cannot be judged in terms of ‘corrupt politics’.”

There are priests, however, who defended immigrants lacking basic necessities, putting themselves at risk.  One of them, serving for nearly two decades a church in the heart of Athens, explained to us how he was abused by Golden Dawn thugs.

“The attacks on immigrants were politically motivated. They were the victims of clashes for electoral reasons. All I tried to do all these years was my priestly duty: helping immigrants by handing out free food, giving them some clothes. For that reason Golden Dawn was regularly threatening me. I was in danger. At the time, I felt lonely because no one from the Holy Archdiocese of Athens ever supported me, not even with a statement”

There are many reports that Greek Orthodox church offers its blessings to the neonazis. However, one can find many efforts and initiatives that are anti-nazi.

“Nazism and the Gospel have two completely opposite meanings”, says Dr Thanassis Papathanasiou, Editor-in-Chief of the journal “Synaxis”, a publication on orthodox Christian faith.

“As the time passes by, judging from the people that go to church and from what the priests are saying to their flock, even the ‘hard conservatives’ cannot tolerate what GD is standing for. As for the high ecclesiastical hierarchy, condemnation should be immediate, explicit and official”, he adds.

* This story was written nearly 3 months ago, before the Golden Dawn arrests 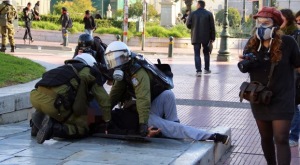